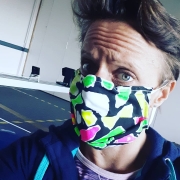 As COVID struck the world and brought devastation to so many we were reminded that there are more important things than sport.  As the Olympic & Paralympic Games were rightly postponed, we as Paracanoe athletes were faced with the startline being only 162 days away suddenly slipping to 527 days. Together with most of the world, we too were ‘lockdown’ in our houses.

The reality of training in a bungalow with little equipment and no lake hit home.  But there were more important things going on and our job quickly became about making the most of what we had and doing our best. Not a bad mindset for life!

We emptied the garage, filled it with bits and bobs of gym equipment and had a paddle ergo machine in our garden under a gazebo from the 1990s!  We cracked on doing what we could.  It was challenging, of course, but we made the most of it and actually found the 15 weeks quite surprisingly good!  We made good physical gains, we enjoyed the extra time at home, and I realised I can have a better sport:life balance and still be a world-class athlete at the top of their game!

Finally, in June, we were back on the water and the kayak, my more unstable boat had taken a real hit.  Disability is a real issue for stability, so I struggled for many weeks regaining the usual stable base I had worked so hard for.  We have taken huge learnings from our ‘COVID time’ and made changes that we will keep forever. Mostly about being kind to ourselves, looking for positives and having conversations at the right time to get more out of each and every one of us.

So in true style I had made a plan for post operation, of course I knew my wrist would be out of action, meaning transferring, wheeling my chair, driving etc would all be ‘different’ I just hadn’t planned for how different….

Waking up in recovery was bizarre, the last thing I remembered was the anaesthetist asking what my favourite drink was before saying ‘I’ve just given you a bottle, have a nice sleep’.  I was groggy and felt sick but managed to ask how it had gone and was chuffed to bits to hear ‘no wires’.  The surgeon had expected to have to use wires which would then have to be removed in another operation, so hearing that we had ‘got away’ with no wires sent my brain speeding into ‘well that’s amazing, must mean a shorter rehab and I’ll probably be back on the water in a couple of weeks…’, before I drifted off again into a woozy sleep.

We left hospital the next day with a huge bandage but positive about getting on the rehab road.  It dawned on me as we returned home that life was suddenly very different, I couldn’t get myself out the car, I couldn’t wheel my chair or transfer myself onto the sofa, the bed or a chair and worst of all I had to be lifted onto the toilet. Mortified I asked to be left alone and struggled for a good 10 minutes to think of a way to get my trousers down with one working limb, while keeping my balance on the loo….I couldn’t and probably the first time in nearly 20 years as I called for help I felt ‘disabled’.

I’ve been so lucky in my life since disability to have opportunities to prove myself, to show my disability doesn’t define me and that I can do so much more than people might think.  I’ve done things I never could have dreamt of and achieved things alongside those I love that might have seemed impossible. My journey has always been about proving what I can do and highlighting abilities not disabilities so to suddenly find myself unable to do the most basic tasks myself was brutal.

This isn’t supposed to be a poor me blog, far from it, but I need to set the scene for how life impacting this thankfully short period has been. It took me by surprise, I had assumed that I would just manage, that we would find a way for me to be independent, but we couldn’t, there just wasn’t a way to manage on my own.  Hopefully this blog can highlight how our own mindset can define not just how we act but how we feel and how we live. I needed to find a rehab mindset and apply the principles I had started to become good at in my everyday life as an elite athlete to my everyday life where I was feeling anything but an athlete…

Time went on and after 4 long weeks I was able to use my elbow to transfer myself onto the loo! It was like a milestone!  Normally only satisfied with taking chunks of seconds off or adding big weights on I was telling everyone that I could pull my own pants down and transfer onto the loo!  We had managed to keep the mobility scooter (thanks to @Bromakin) so I was back in the training environment with my teammates albeit just doing rehab I was back in the surroundings I loved and it was now I needed to find the right mindset to keep the fears, doubts and emotions at bay while encouraging my teammates as they made the progress I only wished I could and to keep the belief that I could and would be an athlete again.

I had good days and bad days and like I’ve learned in my sporting career over the last few years its about managing and minimising the bad and giving myself the best opportunities for more good. My staff team and I worked out our plan which didn’t look too bad at all. Back on the water by end of October and back working on strength by January.  I was chuffed! That was an outlook I could fully get behind. We worked out what we could work on while injured and identified a couple of things which would be ‘nice to haves’, things that a normal training year doesn’t allow for but things that could make a performance impact and off we went, working hard on the sessions and keeping my mind as positive as possible.

Our visit to the surgeon after 6 weeks changed things, he announced it would be another 10-12 weeks before we could load properly through the wrist or apply any unexpected forces. I was devastated, I’d even got my winter water kit out ready at home for my return to the water. It was not the news we had wanted but we always knew rehab journeys are unpredictable and we had to follow his advice to protect the slightly different repair he had done. The good news was he was happy with the surgery but it was just up to us to not ruin it now and set us back.

Back to the drawing board with new time scales and an adapted gym programme using forearm straps to load through what had become my tiny right arm and shoulder (I’ll never understand how muscle mass takes so long to gain and is so quick to lose!). I was still struggling with having to ask for so much help and feeling ‘disabled’ again all these years later but after chatting with my sports psychologist & a brilliant Olympic athlete, who had also been injured, I had a new found mindset, that I knew would power me through these next few months……we had been dealt a hand of cards, ones that we didn’t want, that weren’t ideal, but they were the cards we had.  WE just needed to now play them in the best way we could, even throwing in the odd trump or joker as we go! I’d better get practicing my left hand dealing #Onwards #CanoeCardShark 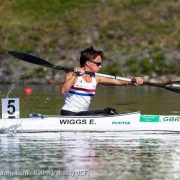 I’ve always been a big planner, never happier than when I’ve got a plan to follow, albeit I’m happy to adapt it and be flexible as needed….as long as there’s another plan to implement!

As an athlete you always have a plan about what you want to achieve and how you will go about it.

Matt (my coach) and myself had a plan for 2018… get bigger, get stronger & make the boat faster!

And we did, we worked tirelessly all winter smashing out gym sessions, battling the harsh weather on the water and eating anything not nailed down and we got faster… faster than either of us thought we could. The racing season started in May and we unexpectedly broke the world record in both boats (thanks partly to a large tailwind), smashing the 49sec barrier and becoming the fastest women in the world ever in the kayak!

We’d hit a peak earlier than expected and tried to build on this through the season until the main goal, the World Championships in late August.  We’d won two World Cup golds, two European golds, we’d broken the world’s fastest times in both boats, we were flying.

And then the plan went wrong… we had an accident in the gym.  Accidents happen but when they are avoidable it’s frustrating, it’s devastating, you blame yourself for that moment of complacency that derails your plan and can send you spiralling into despair.

My wrist was damaged, really damaged, a subluxed bone and ruptured ligaments, just before the competition we’d been aiming for and working towards all year. It threw me, a mix of emotions and self-obsessed pity – ‘why me?’ ‘I’ve worked so hard?’ ‘this is so unfair?’ – but surrounded and supported by the right people we made a new plan and headed off in a slightly different direction.

The injury was what it was… we couldn’t turn back the clock, we couldn’t undo the accident, but we could choose to make the most of it.

We accessed the best surgeon and sought the best advice, I couldn’t wheel my wheelchair or transfer pain free but bizarrely I could paddle my boat. The surgeon said we couldn’t do any more damage, so we decided to carry on, to learn as much as we could about preparing to perform on the world stage with an injury and knowing we weren’t quite as fit as we would have liked to be.

We would get the surgery to get it fixed after the World Champs. Athletes rarely always line up at 100% so the chance to practice and learn from the experience was too valuable to miss.

My teammates were amazing, supporting me and helping me in the usually stressful last few days before competition. The banter about the mobility scooter I was now forced to use helped keep the mood light. My focus was now about thriving in this situation and being the best athlete I could.  My teammates Charlotte & Jeanette had been pushing me all year with us grabbing the gold & silver at every major competition – no mean feat given the progression of our fast-moving sport.

So, as I lined up I knew it would be the toughest races of my life, but line up I did, confident that I had battled the demons of self-doubt that rise their ugly heads when injury strikes, having conquered the fear of what might or might not happen and totally relaxed and focussed on delivering the best 200m I could.

And that’s exactly what I did. I couldn’t have imagined being able to feel that relaxed and ready when we were faced with the injury news a week earlier, but I did and I was taking home – with a silver & gold medal tucked in my bag – a horrifically painful wrist but a huge smile of pride as I travelled back to face the unknown as we headed into surgery….