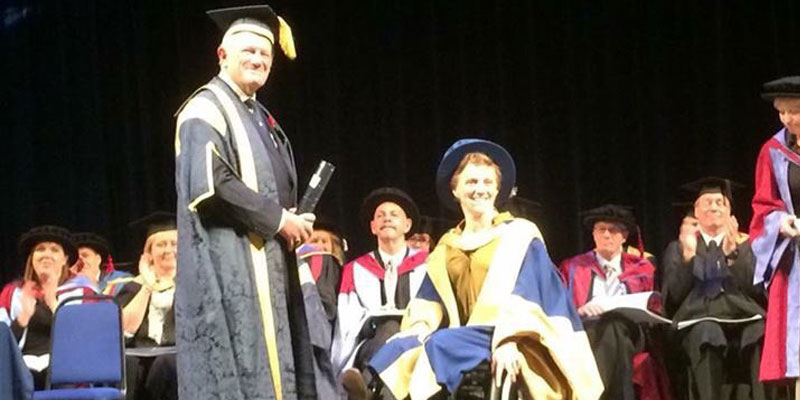 EMERGE Sports Management athlete Emma Wiggs received an Honorary Doctorate from the University of Chichester, at a graduation ceremony this past Sunday.

Emma is a University of Chichester graduate herself having graduated with a degree in sports and exercise science in 2003, before qualifying as a teacher by gaining the Postgraduate Certificate in Education the following year. She was given an Honorary Doctorate of Education in recognition of her teaching career at Lavant House School, Chichester, and The Regis School in Bognor as well as her incredibly successful paracanoe achievements since she became a full-time athlete in 2012.

The accolade means a lot to Emma who has always held teaching close to her heart: “I am really proud to have been chosen for an Honorary Doctorate. The University of Chichester is a place that will always mean a lot to me as it encouraged me to achieve my aspiration of becoming a P.E teacher.”

This latest recognition comes after Emma was shortlisted for the Disability Sportswoman of the Year 2017 at last week’s Vitality Sportswomen of the Year Awards in London. Having had a phenomenal 12 months which has seen Emma retain her British, European and World Championship titles, Emma now holds the prestigious Grand Slam champion status, as she is the reigning Olympic, World and European champion, after her gold medal at Rio 2016.

Emma was amongst eleven influential figures being recognised for contributions to their fields, which also included Team GB sailors Hannah Mills and Saskia Clark, as well as Olympic windsurfer Nick Dempsey. They joined more than 2,000 graduates at the Chichester Festival Theatre on Sunday 5 and Monday 6 November.