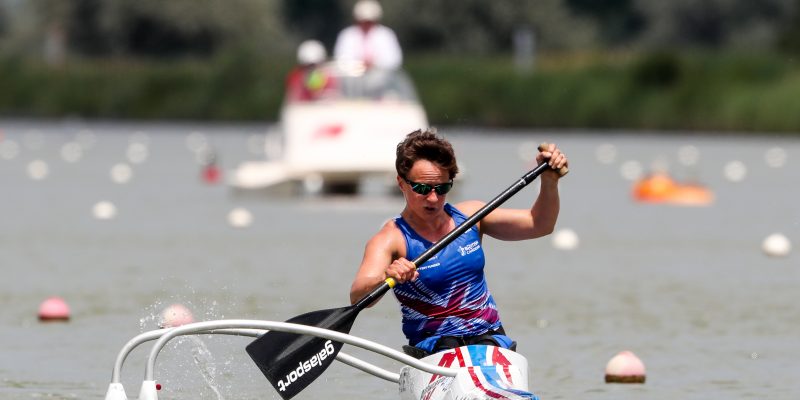 Emma Wiggs MBE produced another superb performance to become an eight-time World Champion by winning a second successive VL2 at the 2019 Paracanoe World Championships in Szeged, Hungary. Emma also secured a silver medal in the Women’s KL2, being pipped to gold by her Great Britain teammate Charlotte Henshaw. Emma’s achievements have ensured her place on the plane to Tokyo to defend her KL2 Paralympic gold and compete in the inaugural Paralympic VL2 race.

Emma recently recovered from a severe wrist injury that she wrote about in a heartfelt blog here but showed no signs of letting that stop her in her outstanding victory in the VL2 final, breaking the minute mark in her heat, before finishing over a second clear of Australian silver medallist Susan Seipel in the final with a World Record time of 56.10 seconds.

Emma heaped praise on her family and friends, whose support was invaluable throughout her recovery from injury.

“It just means so much for Matt, and my wife Gemma, and my family and friends because it’s just been a tough year and I’ve been pretty up and down. They’ve never not believed in me, so it just means the world to do it for them”. You can view Emma’s full interview with British Canoeing TV here.

The following day saw Emma finish a close second behind teammate and close friend Charlotte Henshaw to achieve a silver in the VL2 event. Emma was thrilled to finish the World Championships with a gold and silver medal, particularly in light of her injuries and was equally delighted for her teammate Charlotte who she shares a friendly rivalry with.

“Charlotte’s a phenomenal competitor so to just be alongside her on the podium is brilliant and she’s done incredibly well, but I’m over the moon to get a season’s best this year and we’ll go back get a strong winter in and see if I can be competitive”. Watch Emma’s full interview here.

You can read more about Emma and the GB team’s success at the 2019 Paracanoe World Championships by clicking here.

COVID…a huge challenge but also a potential to find an opportunity?
Scroll to top