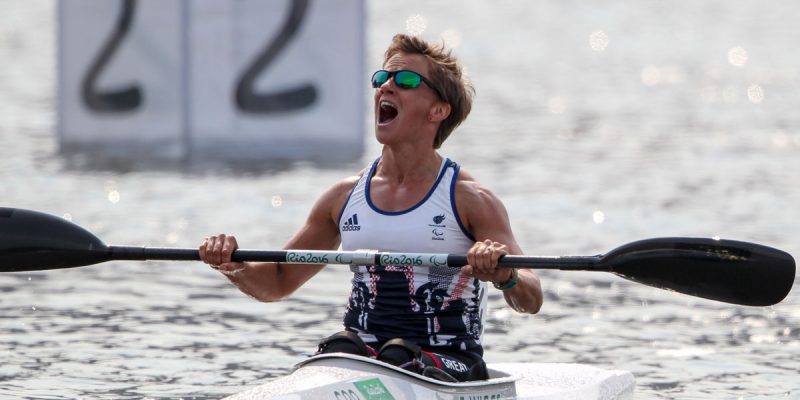 Emma raced superbly to make history and become a double Paralympic Champion and the first-ever winner in the Paralympic Women’s VL2 event!

Emma’s time of 57.028 ensured a historic gold and beat the Paralympic Record she set in the heats by over a second. Emma finished over four seconds faster than Australian silver medallist Susan Seipel and was also joined on the podium by fellow Brit Jeanette Chippington. Emma and Jeanette’s medals were Paralympics GB’s 99th and 100th medals in Tokyo, with Great Britain second in the overall medal table, behind only China.

After the race, Emma was understandably thrilled and emotional, saying, “I’m unbelievably chuffed and happy to be here with this heavy medal. It feels incredibly emotional because of the struggle everyone has had globally, and I’m overwhelmingly grateful to the Japanese people and the organising committee for putting the games on.”

She continued: “It’s amazing to make history and to get on the podium with Jeannette again is more than we could have dreamt of, and I’ve just heard that Rob has got on the podium, which has made me cry again. I’m so proud of the team we have and there’s some unbelievable talent and more to come tomorrow, so stay tuned for that.

“It’s been a lot of hard work and our team have been incredible. The staff are world-class in everything they do. We do the easy bit, paddling 200m.

“My family have also been incredible and that’s why I find today so emotional as they’ve been part of this journey the whole time. I just wanted to make everyone at home proud. I actually imagined them on the bridge, and I paddled towards them.”

Whilst they weren’t able to be in Tokyo, Emma was cheered on by a group of family and friends in her hometown of Watford, who could probably be heard from Tokyo as Emma crossed the line.

Great Britain's Emma Wiggs had some passionate support back home as she stormed to gold overnight in Tokyo | #Paralympics pic.twitter.com/7EnX8TdCNM

Emma is competing again tomorrow in the KL2 Final at 3:04 am (UK Time) with coverage across Channel 4 and their streaming site All4.